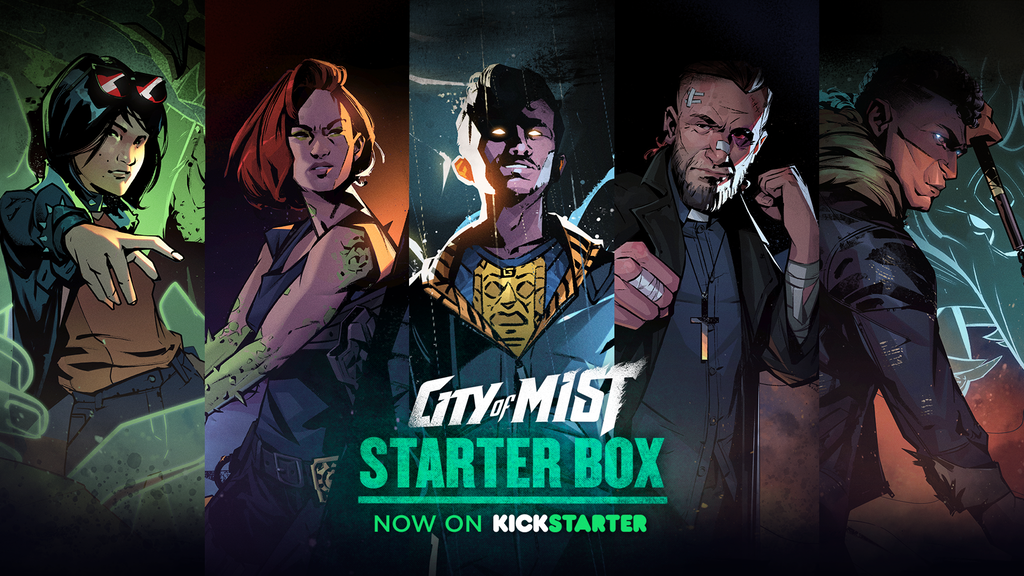 How can I swap the books in my pledge for other City of Mist titles?

About a week after the campaign is over, we’ll send you a link to the pledge manger where you’ll be able to swap the default books in your pledge for the ones you want. You can replace each book in your pledge for any other book.

My group usually plays Dungeons & Dragons 5E. Will they like City of Mist?

If your group likes to:

… then City of Mist is definitely for you!

City of Mist is different from D&D in that it doesn’t use a finite list of options for characters’ races, classes, skills, and actions. Instead it gives you the tools to really get creative with your story, while keeping the game balanced and challenging. Give it a shot!

I’m new to this game, tell me a bit about it.

In City of Mist you play a unique combination of a real-life persona and a legendary myth. Your life is a game of balance between magic and normality.

The City of Mist is a modern city where ordinary Joes and Janes gain supernatural powers derived from their legendary alter-egos. Imagine Little Red Riding Hood as a crime-fighting teenager, Captain Hook as a drug dealer, and the Greek Icarus as a daredevil biker.

The Mist hides these miraculous powers from the other residents of the City. It makes a knight’s armor look like a flak vest and a dragon’s fire breathing like a cheap party trick, so no-one ever knows about the legendary.

Together with your ragtag crew, you will hit the dark streets to uncover the insidious forces at play in your City, confront ancient legends in modern-day guise, and discover the truth about who you really are.

City of Mist is a multi award-winning tabletop roleplaying game. Its cinematic flair and story-first, tag-based game system have been widely acclaimed, making it a favorite among new and veteran roleplayers all over the world.

I’m new to role-playing games, is City of Mist for me?

It’s easy to pick up. There is only one type of dice roll and only eight core actions in the game. You learn ‘em, you got it.

It runs on tags, not numbers. Forget memorizing stats, and dealing with tables. In City of Mist, any ability or resource your character has, and even the conditions she suffers from, are described in words.

It unlocks your creativity. Whenever your character takes action, you combine different tags - from your backstory, from your skills, or from your mythic powers - to inform the action. Any details from your story can have a real effect on the game.

It’s all about the drama. From the get go, your character must juggle around her conflicting motivations. If she neglects an aspect of herself, be it the mythical or the mundane, it will completely alter who she is and her abilities will change accordingly.

Finally, If you love detective stories and urban fantasy, and you enjoy solving crimes and the gray morality of life in a gritty City of the noir genre, you will love City of Mist!

What are the recommended ages for this game?

City of Mist is a crime drama game - some themes may not be appropriate for children. Other than that, we’ve played this game with virtually everyone, from young teens to players over 60. As long as you’re into storytelling, myths and legends, and a detective storyline set in a gritty noir City, you can play this game.

What is this Kickstarter hoping to fund?

This Kickstarter campaign is focused on printing the new Starter Box, which was completely redesigned from the original City of Mist Starter Set, greatly enhancing its playability and ease-of-use.

If you are new to the game, it’s the best way to learn it. If you are a veteran of City of Mist, it’s the ideal way to introduce more friends to one of your favorite RPGs.

Since it is already developed as a PDF it is ready to go to print (as well as some of the stretch goals). The Starter Box (if funded) will be in your hands by April 2020.

If we fund the project, we’ll continue to add lots of goodies to the box as stretch goals.

The City of Mist Starter Box is a “learn-as-you-play” introduction to the world and rules of City of Mist. You’ll play one of five anti-heroes with legendary abilities – the crew of the “All-Seeing Eye Investigations” agency – as they fight to free their neighborhood of Miller’s Square from the grip of a mythic-powered mafia organization, in a full-length introductory case: Shark Tank.

If you are new to the game, it’s the best way to learn it. If you are a veteran of City of Mist, it’s the ideal way to introduce more friends to one of your favorite RPGs.

I already own City of Mist. What new products are introduced in this Kickstarter?

The main new product that’s added to the City of Mist product line is the Starter Box. You can also pick up any books and accessories you don’t own yet at a discount price.

If we reach higher stretch goals, we will introduce new print products, such as a collection booklet of all the City of Mist districts.

I’ve previously purchased the Starter Set PDF on cityofmist.co, do I get credit for this campaign?

Yes, if you’ve already purchased the Starter Set in PDF format, you will receive $10 credit for getting the print version, which will be applied on BackerKit.

This essentially means that you can back for $10 less than you would need for any tier. Simply pledge for the $1 or more tier and pay the amount of the tier you want, minus the $10 credit (don’t forget to add the correct shipping fees for your chosen tier).

I’m a returning backer (or have pre-ordered items from your online store) would you be able to combine the shipping for items I order from this campaign with my current order?

Absolutely, we’ll be able to bundle it up for you. You will have to pay for shipping now, but we will refund the difference in the pledge manager.

We truly appreciate your continued support!

BackerKit is a service that crowdfunded project creators use to keep track of hundreds to tens of thousands of backers—from shipping details, pledge levels, preferences and quantities, whether they have paid or had their card declined, special notes, and everything in between!

The BackerKit software and support team is independent from the campaign’s project team—BackerKit does not handle the actual reward shipping. For more information about the preparation or delivery status of your rewards, please check the project's updates page.

How does BackerKit work?

After the campaign ends, the project creator will send you an email with a unique link to your survey. You can check out a walkthrough of the process here.

I never received my invitation. How do I complete the survey?

The most common reasons for not receiving a survey email is that you may be checking an email inbox different from the email address you used to sign up with Kickstarter, Indiegogo or Tilt Pro account, or it may be caught in your spam filter.

Confirm that the email address you are searching matches the email address tied to your Kickstarter, Indiegogo, or Tilt Pro account. If that doesn’t work, then try checking your spam, junk or promotions folders. You can also search for "backerkit” in your inbox.

To resend the survey to yourself, visit the project page and input the email address associated with your Kickstarter, Indiegogo or Tilt Pro account.

How do I update my shipping address?

When will my order be shipped, charged or locked?

That is handled directly by the project creator. BackerKit functions independently of the project itself, so we do not have control of their physical shipping timeline. If you want to check on the project’s status, we recommend reading over the project's updates page.

I completed the survey, but haven't received my rewards yet. When will they arrive?

As BackerKit does not actually handle any rewards or shipping, the best way to stay updated on the shipping timeline would be to check out the project's updates page.